skip to main | skip to sidebar

Do you know about World Festival of Youth and Students?

This gathering can be of interest IMO for the free software community, as a self-organizing movement.

The gathering is a general one, has a long history and, I believe, can particularly touch intellectual property subject. It's happening on 13-21 of December. See Wikipedia article and offical site for the current 17th gathering.

On a side note, during the last weeks I returned to Lokalize development: fixed few bugs reported via bugs.kde.org, did few optimizations. I hope you'll like a more polished Lokalize in KDE 4.6 (sorry, the wishes that require new messages will have to wait until KDE 4.7...).
Автор: Nick Shaforostoff на 01:35 Комментариев нет:

So I tried running KDE apps I miss on Mac on Mac Snow Leopard (kdevelop and kopete mainly).

I installed macports following procedures on their site, issued sudo port install kdenetwork4 (kde version is 4.4.x).
I also wrote simple Portfiles for kdevelop 1.0.2., but couldn't run a dbus session using the command given me in the terminal after each kde package install. To fix this i edited /Library/LaunchAgents/org.freedesktop.dbus-session.plist and changed OnDemand and Disabled options in it to the opposite values. 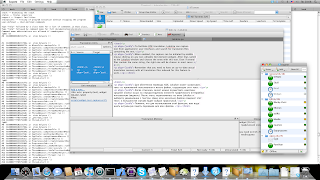 Unfortunately KDevelop crashed after i tried importing a project (you can see the backtrace on the screenshot). Other apps like KTorrent, Kopete, Lokalize are usable (although being a little ugly in the terms of appearance).
Автор: Nick Shaforostoff на 14:31 4 комментария:

Lokalize, the KDE translation tool, saw an evolutional development during 4.4-4.5 period. Most of the changes are bug fixes. I'd like to say 'thanks' to Papp Laszlo, Hungarian translator and Chakra developer (among other things), for doing a lot of work in this regard.

As for the features, the most essential changes are:
* filestats is cached on a disk now, so the initial project scan is alot faster now.
* translation memories are improved in terms of target language: now Lokalize should be more suitable for separate projects (when .po files for all languages are in the same folder)
* simple project creation is back
* glossary storage is rewritten to use QDom classes (should eliminate any previous related crashes).
Автор: Nick Shaforostoff на 21:57 27 комментариев:

For the last 4 month me and several other people (see the sourcecode) had been working on a new piece of software called Skreener, to FLOSS-replace the proprietary and GTK-based Wink, tutorial and presentation creating software.

Skreener is most suited for showing how to use software, and not for showing animation effects. The main difference between Skreener and recordmydesktop (and the like) is that Skreener takes usual screenshots only once per second, and mouse cursor smooth movement is then restored during the playback. For this purpose SVG format is used (Wink generates Flash movies). This allows you to easily cleanup recorded screencast by removing non-essential frames, making the mouse cursor go strictly to the target position.

Today I decided to release the first public preview release of Skreener, just for the case if someone else decides that he is fed up with uncontributable Wink. Basic functionality is implemented, To be done is adding comments (continuing only when user clicks 'continue'), polishing.